Mélie (メリ,, Meri?) serves as the main heroine of the Radiant series. She's also the first character to initially join Seth in his adventure to discover the mythical Radiant. 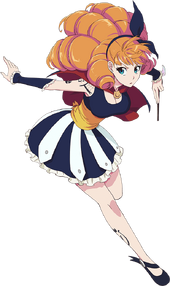 Mélie is an ordinary sized, slender young girl with big blue eyes. Mélie typically is seen wearing a navy blue tank top, fastened down by an orange sash along her belly. She wears this in tandem with a blue-and-white striped skirt. While sporting a slender physique, Mélie has been noted to have a sizable bust.

Her most striking feature, however, is her ensemble of red, thick, curled-pigtails that drape over one another in a mountain of hair. The spacious hairdo is so grand that it seems to be a fitting nesting spot for her pet, Mr. Boobrie. These locks are tied together with a blue-ribbon that's fastened along the right side of her head.

When in her normal state, Mélie typically carries a callow demeanor, her eyes normally being wide with a child-like wonder and naive deposition. This facet of her appearance reverses, nevertheless, when she's suffering from the effects of her infection. When using her other personality, her features stricken, becoming frenzied and carry ill intent.

Melie is best characterized by her cheerfulness and sincerity. She always acts with care, hopeful to avoid harming a person's feelings, and seems to be in support of her friends' ambitions, no matter how insane they may first appear to be. This is shown more prominently in the anime as despite just meeting Seth on the Inquisition's Air Ship, she immediately shows concern with aiding the young sorcerer in his adventure to find the Radiant. Initially, Melie suffers from an extreme lack of self-confidence. She finds herself unsure of her own magical ability, and rarely tries to utilize offensive magic. However, after meeting with Seth, Melie's confidence slowly begins to increase with her eventually adding different offensive spells to her normal repertoire. Despite this, she struggles with her inability to control her curse, as well as preventing the death of her sister, Venelope. To Melie, the failure is a byproduct of her own weakness that inevitably either leads to someone dying or people avoiding her. Naturally, with the fickle nature of her split personality often leading to carnage, most people are afraid of actually getting too close or becoming friends with Melie. As a result, she typically remains isolated from much of society and suffers from extreme loneliness. This longing for friendship is in part one of the prime reasons why she gravitates to Seth, who doesn't seem to at all mind her crazy double personality and the trouble associated with it. Melie's desperation is often shown comedically, such as where she eagerly demanded Seth to pay her back, due to the saying he explained that "short reckonings leads to long friendships." This isolation has forced Melie to resort to creating cardboard cutouts to act as her friends, with which she often engages in imaginary tea parties. She greatly enjoys festivals, ceremonies, or any other form of social get together. In addition, Melie seems to fancy cosplaying as others.

When enraged or put into a stressful environment, Melie's secondary personality is invoked. In this state, the usually cheerful girl becomes a very fickle, angry gal that becomes easily provoked into violence. She gains exceptional confidence in her ability, never doubting herself no matter the circumstance, although this confidence isn't to be confused with foolishness, as when she is faced with a credible threat, she tends to act more rationally. When Dragunov has her cornered with an arrow facing her head, she immediately complies allowing herself to be taken prisoner. Melie absolutely hates being told what to do, and will refuse a command no matter how logical it is to ensure that the person knows she answers to no one. While mean-spirited, enough interaction with her and perseverance enough through her violent and insubordinate outbursts, will begin to soften her animosity towards a person. She seems to be particularly fond of Seth and who she allowed to rest in her bed for three days while watching over him. Melie even shows mild embarrassment whenever he hugs or holds her, with the snide expression she usually wears wavering as she tries to maintain composure.

Retrieved from "https://radiant.fandom.com/wiki/Melie?oldid=3370"
Community content is available under CC-BY-SA unless otherwise noted.