Nemeses (ネメシス, Nemeshisu?) are a powerful, mysterious race of demonic entities. They spawn from massive eggs that fall from the sky at random, before hatching into their various forms. They serve as the central antagonist to the world, and are the catalyst for a Sorcerer being created.

Nemeses are hatched from mystical eggs that fall the heavens, believed to have originated from the legendary nesting ground known as the Radiant. The process of hatching can be hastened if the egg is attacked through external means. These extraordinary creatures come in a plethora of different shapes and sizes. Some are colossal, intimidating monstrosities, while others have statures that are no more grand than a simple human being.

Whether they come in the form of a massive, wyvern-like beast, or a much smaller, rodent appearance, every Nemesis seems to follow the same color scheme of being colored in black and white, and they all sport bony shells as faces. According to Doc, all Nemeses also have a marking or insignia etched onto some part of their body, this symbol glows when one is being controlled by a Dormitor. 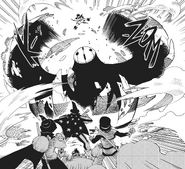 Add a photo to this gallery

Nemeses that spawn from the Nemesis Egg are known as the Source Nemesis. A Source Nemesis uniquely possesses the ability to reproduce over time, creating Echo Nemeses that are usually just a smaller, less potent version of the original. In addition, Source Nemeses also toxic to human beings, contact with them will cause the human to be enveloped in a shroud of Fantasia, vaporizing their bodies more often than not.

This type of Nemesis prompts Feather Trees to bloom near their proximity and has the capacity to control each their Echo offsprings.

An Echo Nemesis is the off spring of the Source. Echo Nemeses are normally an inferior version of the parent Nemesis, with similar abilities and attributes on a much smaller scale. They function as foot soldiers and are used to scout an area or overwhelm an opponent. Unlike the Source Nemesis, Echoes are unable to infect humans and are capable of being harmed by normal weaponry, as seen by one being slain by Dragunov's arrow.

Add a photo to this gallery

Consistent among all species of Nemeses, these deadly creatures are extremely resilient to damage, and have a high threshold for pain and damage. Their bodies can continue on, even after suffering major, near fatal attacks, making it necessary for a Nemesis to be either annihilated or cut down beyond repair. In the cases where they aren't slain, Nemeses have a very generous healing factor, and can regenerate lost limbs or other grevious wounds over time.

From there, their physical parameters vary based on species. Some are capable of flight, others have monstrous strength, or even possess super speed. Due to the highly versatile nature of a Nemesis' physiology, these creatures can possess abilities ranging from elasticity or even venomous bites.

Source Nemeses are toxic to human being, and a single graze can prove fatal. On any contact with humans, they will envelop the target in a chaotic shroud of Fantasia, vaporizing them at a rate of 87.5%. Those that do survive the encounter, however, are forever cursed with a unique infection and gain the ability to meld Fantasia just as the Nemesis do. These people are called Sorcerers.

The curses placed onto the target vary just as the Nemeses do, with no single curse being the same as the next.

These demonic creatures are all capable of wielding Fantasia for devastating attacks. Uniquely, they require no special equipment or items to cast these attacks. How they do so vary based on their physiology, with some firing from their mouth, and others firing from their tails. They have a degree of versatility when it comes to its application, showing the capacity to use Fantasia beams in myriad of methods, and some even being able to repel magical attacks.

Add a photo to this gallery
Retrieved from "https://radiant.fandom.com/wiki/Nemesis?oldid=3721"
Community content is available under CC-BY-SA unless otherwise noted.