Seth (セト,, Seto?) is the main character of the series. Because of his infection, he is constantly referred to as Horned Boy, or Jean Pedrovitch de la Noche Salomon Grispépin Wondersmith, a charming name given to him by the Master Lord Majesty. As a sorcerer, he is dead set on hunting down the Nemesis. However, his main objective is to bring about a world where Sorcerers aren't persecuted, and to that end, desires to destroy the source of the Nemesis themselves - the mythical Radiant. 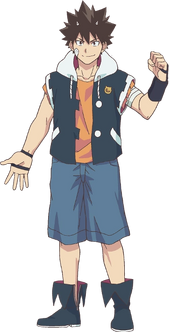 Seth sports a slim, athletic build. He is of average height for his age and possesses spiky brown hair that is typically worked into a tousled, mildly unkempt manner. The young sorcerer possesses two white horns that pierces through the bush of hair, and designate his existence as an infected, and by virtue as a sorcerer.

He usually wears an orange tank top, covered by a dark-blue and white-decorated sleeveless, hoodie-jacket. He wears boots that are partially unzipped, and has Azure Bermuda shorts. Seth wears brown, fingerless feather gloves, although this is simply to fool people into believing he needs a feathered tool to use Fantasia.

Underneath these gloves, Seth wears bandages on both hands. He also has a bandage mark along his right cheek, which serves as some form of sealing to keep his magical potential in check.

Seth is best characterized by his buffoonish and reckless nature. He is also noted by many characters to lack conventional intelligence and not being too bright. As a result of his sheltered upbringing, the boy is initially ignorant to basic facts of modern life. In the manfra, his ignorance of the world is to such a degree that he fails to register what a common cow looks like, mistaking it for a Nemesis, and launching an attack the inevitably leads to a stampede. In addition, Seth seems to lack basic information about the world around him, even seeming to be clueless about the true nature of the Inquisition.

Seth is known to be extremely immature, goofy and childish. He finds himself tickled by even the silliest things and is even prone to poking jokes or having fun during hostile combat. When battling the Golem Nemesis in Pompo Hills, the boy is taken over by laughter after smashing the demon's face into a funny shape. He even manages to immaturely rip off Konrad's mustache during their battle in Rumble Town, using the opportunity to subsequently wear the mustache himself, mocking the Inquisitor Captain. His childlike deposition is a constant source of ire for both Alma and Doc, although the two secretly find themselves endeared by Seth's childlike wonder and mindset.

The persecution he faced as a child has a profound effect on his development. Initially, Seth desired nothing more than to use his sorcery to lay waste to all of the vile human beings that discriminated against him. But yet, another part of him longed to resist the temptation, refusing to become the monster these horrid individuals swore that he was. To that end, Seth always seemed to strive for the acceptance of the population in Pompo Hills despite his thoughtless, boneheaded actions often times invoking the ire of the very people he sought to befriend.

He has a strong sense of justice and tries to sympathize with most people he comes in contact with, even if they persecuted him, or outwardly come off as villainous. Even as the world at large discriminates about sorcerers, Seth, on the other hand, tries to rationalize the hatred. He initially comes to believe that sorcerers are targeted because people relate them to the Nemeses, and thus reasons that if he can put a stop to the Nemeses descending from the skies, the animosity will disperse. Although this simplicit ideology evaporates after his encounters in Rumble Town.

While kindhearted and eager to see the good in people, once an individual proves themselves to be rotten villains, Seth holds nothing back and will mercilessly attack. As was the case in his bout with Konrad, where the young sorcerer attacks with reckless abandon, and even manages to slay the Inquisitor after launching a thunderous Skull Burst.

At his core, Seth is an optimistic idealist that will endlessly pursue his goals. He cares little about the improbability of success, so long as there is a glimmer of hope, the sorcerer will go to no ends to reach his ambition. Such is the case with his search for Radiant, despite being told how hopeless the journey was likely to be and being informed of how many have tried and failed to do the same as he.

Retrieved from "https://radiant.fandom.com/wiki/Seth?oldid=3125"
Community content is available under CC-BY-SA unless otherwise noted.